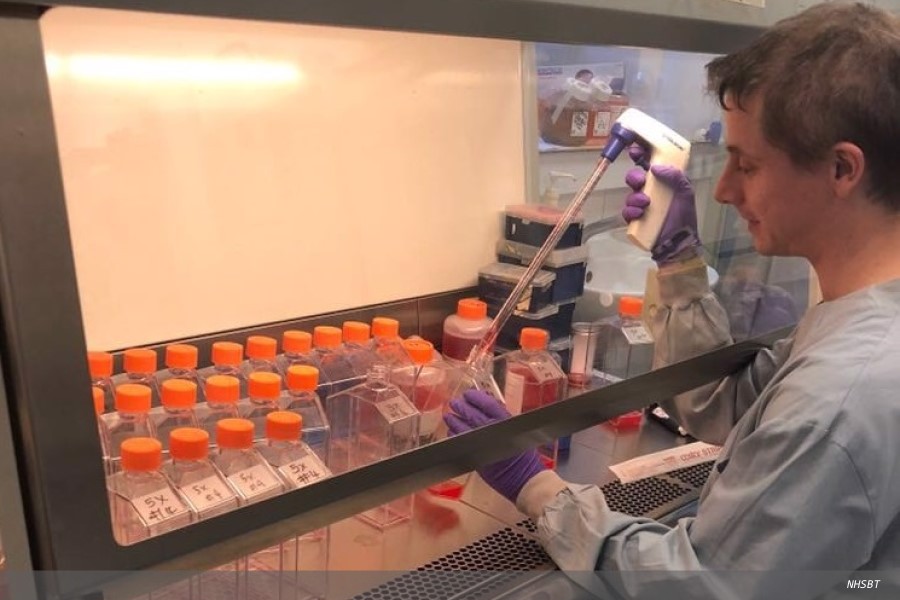 This is the first time in the world that red blood cells that have been grown in a laboratory have been given to another person as part of a trial into blood transfusion. If proved safe and effective, manufactured blood cells could in time revolutionise treatments for people with blood disorders such as sickle cell and rare blood types. It can be difficult to find enough well-matched donated blood for some people with these disorders.

Additionally, if manufactured cells last longer in the body, patients who regularly need blood may not need transfusions as often. That would reduce iron overload from frequent blood transfusions, which can lead to serious complications.

The trial is the first step towards making lab grown red blood cells available as a future clinical product. For the foreseeable future, manufactured cells could only be used for a very small number of patients with very complex transfusions needs. NHSBT continues to rely on the generosity of donors.

Two people have so far been transfused with the lab grown red cells. They were closely monitored and no untoward side effects were reported. They are well and healthy. The identities of participants infused so far are not currently being released, to help keep the trial ‘blinded’. The amount of lab grown cells being infused varies but is around 5-10mls - about one to two teaspoons.

A minimum of 10 participants will receive two mini transfusions at least four months apart, one of standard donated red cells and one of lab grown red cells, to find out if the young red blood cells made in the laboratory last longer than cells made in the body.

Further trials are needed before clinical use, but this research marks a significant step in using lab grown red blood cells to improve treatment for patients with rare blood types or people with complex transfusion needs.

Professor Ashley Toye, Professor of Cell Biology at the University of Bristol and Director of the NIHR Blood and Transplant Unit in red cell products, said: “This challenging and exciting trial is a huge stepping stone for manufacturing blood from stem cells. This is the first-time lab grown blood from an allogeneic donor has been transfused and we are excited to see how well the cells perform at the end of the clinical trial.”