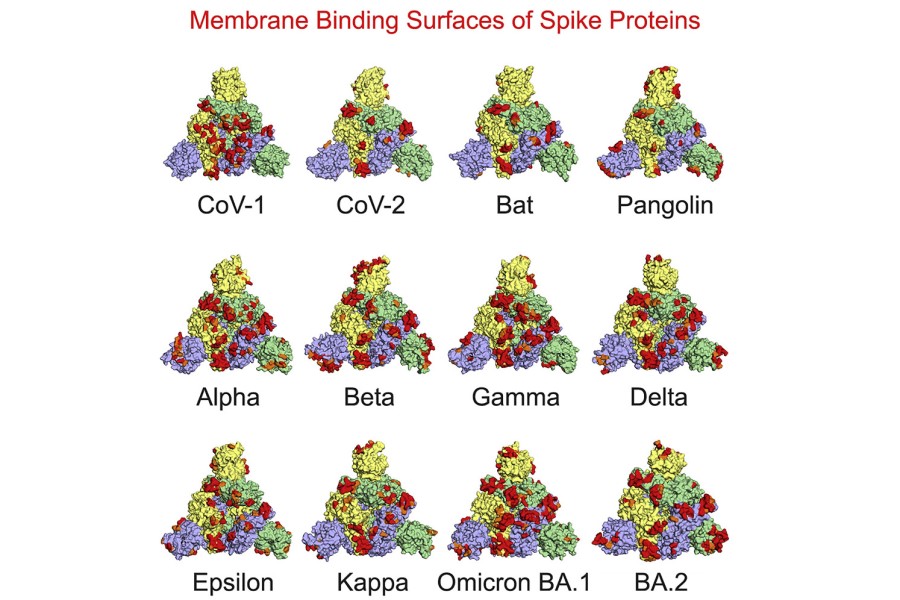 Understanding where and how protein spikes invade healthy cells could advance the fight against COVID-19 and other viral illnesses.

University of Alberta (U of A) research shows how cell membranes play a much larger role than previously understood in allowing spike proteins on viruses to infect cells. The findings, published in the journal iScience, could give scientists the upper hand in tackling SARS-CoV-2 - the virus that causes COVID-19 - and other potentially deadly viruses.

The team of researchers, led by U of A professor of biochemistry Michael Overduin, used software called Membrane Optimal Docking Area (MODA) to identify interactions between proteins and membranes within cells.

When the COVID-19 pandemic shut down laboratories at the U of A, Troy Kervin, an undergraduate student in Overduin’s lab, shifted his research to work he could do outside of the lab. He assembled all the proteins in one family of membrane-binding domains, and used MODA to predict which regions on the domains bind to membranes. He found that cell membranes play a more significant role in viruses binding to cells than previously thought.

Those findings became the foundation for additional research about cell-binding activity, namely if spike proteins - such as those found on the SARS-CoV-2 virus - bind to membranes.

The consensus in the scientific community has been that the job of spike proteins in SARS-CoV-2 is to bind to angiotensin converting enzyme-2 (ACE-2) receptors that are on the outside of cells, not to the cell membrane.

With the help of another undergraduate student, Anh Tran, the team began the process of using MODA to compare a large number of structures of spike proteins in both the original — or ‘wild type’ — virus and the variants. They found out how the spike protein engages the lipids of our lung cells and gets in before also learning that the Omicron variant was super active.

The team thinks that other viruses aside from SARS-CoV-2 use similar mechanisms to enter cells, but until recently the process has been difficult to observe. The development of software like MODA makes it easier to make predictions like this and describe how proteins really behave in a cell. “We're at the beginning of this digital age where we can really see so much more than we could see even two years ago, where we can look at every protein in the human genome and measure how every one could interact with membranes,” says Overduin.

How are laboratories tackling misinformation?