Antibiotic could be repurposed and added to tuberculosis treatment 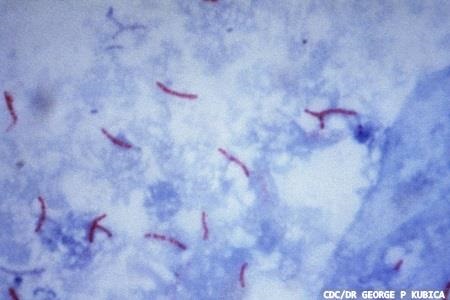 New research, published recently in the Journal of Medical Microbiology, has found that fidaxomicin is more effective than existing tuberculosis (TB) medication at preventing growth of Mycobacterium tuberculosis.

Researchers compared the activity of fidaxomicin and rifampicin, an antibiotic currently used to treat TB, against 72 different strains of Mycobacterium tuberculosis. Of these strains, 34 were resistant to multiple antibiotics. They found that fidaxomicin could prevent growth of all 72 strains at lower doses than rifampicin.

Both of the drugs tested work in a similar way and are in a group of antibiotics are known as RNAP inhibitors. These antibiotics target an enzyme called RNA polymerase, blocking it and preventing M. tuberculosis cells from reproducing.

Fidaxomicin is commonly used to treat Clostridium difficile infections. The researchers suggest that the antibiotic would need to be modified before use, to treat TB in vivo, as the drug in its current form targets the gastrointestinal tract instead of the lungs.

Rifampicin is a well-known frontline treatment for TB. There is increasing concern that antimicrobial resistance is becoming more common in M. tuberculosis, with many strains resistant to several antibiotics. Over 90% of strains of multidrug resistant M. tuberculosis cannot be treated using rifampicin. Finding and developing affordable new antibiotics to treat MDR-TB is desperately needed.

An estimated 1.4 million people died of TB in 2019, and 10 million become unwell with the disease, including 1.2 million children. Very few antibiotics are effective against M. tuberculosis, and as the bacteria become resistant to more and more antibiotics, TB is becoming harder to treat.

The researchers hope to investigate the in vivo effects of fidaxomicin against TB using animal models.

Often, better healthcare is less about pioneering breakthroughs or techniques and more about finding ways to better use existing technology to improve outcomes. And that’s what Una Health is all about: taking an innovative approach to diagnostics to challenge traditional pathways and improve patient outcomes.
We specialise in Pathology and...