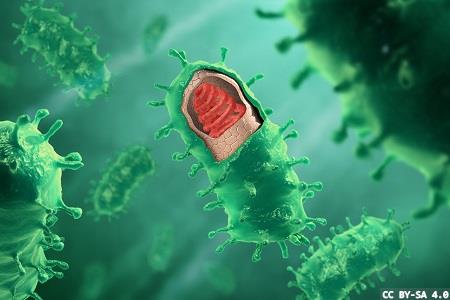 Infectious disease emergence is often the result of a pathogen entering a new host species, as highlighted by the current SARS-CoV-2 pandemic. However, most cross-species transmissions fail to establish in the newly-infected species.

In a new study entitled ‘Virulence mismatches in index hosts shape the outcomes of cross-species transmission’ (Proc Natl Acad Sci U S A 2020 Oct 29; 202006778. doi: 10.1073/pnas.2006778117. Online ahead of print), led by a team of researchers at the University of Glasgow, scientists found disease progression was accelerated, which reduced the chances of onward transmission, when the original host and the new host were physiologically or genetically more dissimilar.

For diseases to emerge, pathogens not only need to infect a novel host, but also be subsequently transmitted from one individual to another – a critical step. Why some pathogens succeed at this point while others fail is not well understood.

In this study, the researchers analysed hundreds of published infection experiments involving the transfer of rabies virus – a dangerous pathogen able to infect and cause death in all mammals – from one host species to another.

The study found that rabies virus strains originating in bats – and those transferred from species with warmer body temperatures to those with a cooler body temperature – tended to kill the first infected host too fast for successful onward transmission. The same was true as the genetic distance between the original and infected host species increased.

Dr Roman Biek (Reader at the University of Glasgow’s Institute of Biodiversity, Animal Health and Comparative Medicine) said: “Our work shows how careful analysis of previous infection experiments can pinpoint small changes in the interaction between pathogen and host that may either help or hinder disease emergence, including emergence of new human infectious diseases. This is why investigating the factors which affect the clinical outcomes of cross-species transmission in the first novel host individual infected, the index host, is important, as these outcomes can alter the likelihood of the pathogen spreading further.“

Pipetting made easy: a tutorial series

Reflecting the best of in vitro diagnostic expertise and cooperation

Effects of extreme environments on human biology and physiology

Developing IT for newborn screening and tissue typing services

Connecting, processing and embedding in the histopathology laboratory

Helena Biosciences is a leading medical diagnostic company with an international reputation comprising two flagship business divisions that specialise in the design, manufacture and support of Clinical Electrophoresis and Haemostasis systems.
Proudly manufacturing in Great Britain, with commercial and plant facilities based in the North East...