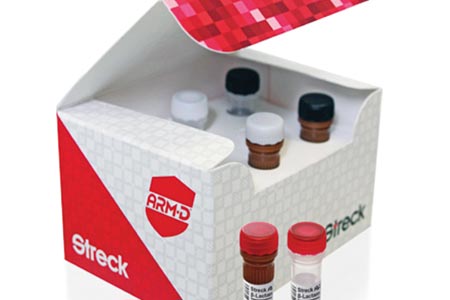 β-lactamase enzymes inactivate β-lactam antibiotics and render them ineffective for the treatment of clinically important Gram-negative bacterial infections. Now, two new kits from Streck, available in the UK from Alpha Laboratories, provide a comprehensive, cost-effective molecular method to detect the most clinically important β-lactamases that confer resistance to penicillins, cephamycins and, in some cases, carbapenems.

These genotypic detection methods identify the most prevalent types of β-lactamase-based antibiotic resistance and complement phenotypic methods for the detection of multidrug-resistant organisms. They can be used with standard susceptibility tests to improve surveillance and epidemiological tracking, for improved infection control and increased effectiveness of antibiotic stewardship programmes.

AmpC β-lactamases are chromosomally encoded in many bacterial species. Their over-expression can lead to resistance to most β-lactam antibiotics, causing therapeutic failure. Transmissible plasmids with acquired genes for AmpC β-lactamases

often cause increased β-lactamase production and can appear in organisms lacking or having low-level expression of a chromosomal ampC gene. Resistance due to plasmid-mediated AmpC enzymes can be broad in spectrum and often hard to detect. As Gram-negative organisms producing multiple or plasmid-mediated β-lactamases are difficult to identify phenotypically, more specific detection methods are essential for the identification of clinically important β-lactamases, and selection of the appropriate antibiotic therapy.

Detection and genetic identification of both plasmid-mediated and chromosomally expressed AmpC β-lactamases are crucial for better understanding of these resistance mechanisms and, consequently, for active surveillance and infection control.

Often, better healthcare is less about pioneering breakthroughs or techniques and more about finding ways to better use existing technology to improve outcomes. And that’s what Una Health is all about: taking an innovative approach to diagnostics to challenge traditional pathways and improve patient outcomes.
We specialise in Pathology and...